A successful business is always led by a strong leader in pursuit of his or her passion. These entrepreneurs typically share common characteristics and attributes that drive their business’ growth. Ultimately, these qualities help them build a dedicated team, overcome hardship and create solutions to challenges. As you work to make your business stand out, consider the following leaders and the characteristics that made them great. Often, the best leadership lessons can be learned from remarkable leaders from history.

At Security Business Capital, we understand that these 7 lessons are part of what makes our invoice factoring company a success. Find out how these leaders’ actions can influence your small business.

The 16th President of the United States, Abraham Lincoln is most celebrated for his role in preserving the nation during the Civil War. Abraham Lincoln’s leadership exemplified the importance of remaining persistent, even when those around you do not believe in your vision.

The next time entrepreneurial struggles overwhelm you, remember the power of persistence. In a factoring company and other businesses, persistence is not only a measure of strength, it also helps you seize new opportunities and thrive. In the words of Abraham Lincoln himself, “Always bear in mind that your own resolution to succeed is more important than any other.” 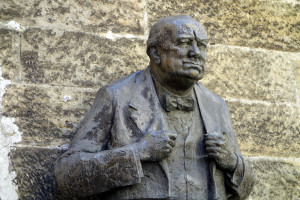 British Prime Minister Winston Churchill wrote every word of his many speeches. For every minute of his speech, he spent an hour preparing. Just three days after Germany invaded France, Churchill gave his first speech as prime minister to the House of Commons: “I have nothing to offer but blood, toil, tears and sweat,” he said. At a time when evil was knocking at the door and victory was uncertain, Churchill’s powerful speeches rallied a nation. In the words of President John F. Kennedy, “...he mobilized the English language and sent it into battle.”

While very different from leading an entire nation in a time of war, running a successful small business does involve an acknowledgment of the power of words. Failing to communicate effectively with clients, staff and the market can result in missed opportunities. To avoid this, communicate clearly and frequently, and make a conscious effort to be a good listener. When under pressure, focus on clarity and resolution. Above all, never underestimate the impact words of encouragement can have on employee morale.

Prince William of Orange: Know When to Take Risks

In the 16th century, Prince William held the Dutch rebellion against the largest and most powerful empire in the world at that time, Spain. Finding his small country surrounded by a massive army, Prince William decided to take a big risk. He ordered that several dikes be pulled down to flood large portions of the Dutch countryside. As a result, the Spanish troops were bogged down. This allowed the Dutch to hold their ground and eventually win the war.

Part of being a strong leader is recognizing when your current strategy is not working. You must be willing to take risks to differentiate your business, even if that involves an extreme change in strategy. In our factoring company, we pride ourselves on taking risks that reap the benefits. We understand that there really is no way to completely avoid risks when pursuing entrepreneurship. The best approach is to recognize risks as the obstacles they are, prepare for and mitigate them. Trust that the rewards of entrepreneurship will likely outweigh any personal risks.

American Baptist minister and activist, Martin Luther King Jr. became the most visible spokesman and leader in the Civil Rights Movement. Rather than disregard the ugly realities around him, he faced them head on. His nonviolent resistance approach to racial inequality had a huge impact on civil rights and earned him the Nobel Peace Prize on October 14, 1964. His actions are a prime example of how great leaders push past reality and convert limitations into opportunities.

Running a small business requires a passionate, dedicated and driven team. However, it’s critical that you make sure your passion does not blind you to reality. If you receive criticism, take the time to analyze whether that criticism is justified. Overlooking or sugarcoating areas where you could improve will only hurt your business’ long-term performance. Even so, avoid making immediate changes after receiving feedback. It is important to thoroughly study each review before implementing any suggestions or insights.

Mahatma Gandhi: Don’t be Afraid to Say ‘No’

Mahatma Gandhi was a pivotal leader in India’s independence movement against British rule. During his lifetime, a law was passed that deprived Indians of the right to vote, heavy taxes were imposed, many were imprisoned without trial and unarmed demonstrators were killed (nearly 400) in the Massacre of Amritsar. Despite being imprisoned multiple times, Gandhi was unafraid to say no to the oppression by advocating for a policy of non-violence and non-cooperation to achieve Indian independence and self-reliance. One of the many lessons to be learned from his example and leadership is the importance of learning to say ‘no’ and the reward of remaining steadfast.

As a growing small business, it is easy to fall into the trap of people-pleasing. Saying ‘yes’ to every question and offer will quickly lead to more commitments than you can efficiently manage. While saying ‘no’ can be difficult, it ensures you are always able to deliver on your promises. To avoid awkward situations and hurting other’s sentiments, give your decision in a timely manner, provide a brief reason why you cannot commit and avoid mince words (e.g. let’s see, maybe, probably, etc.).

Alexander the Great: The Importance of a Succession Plan 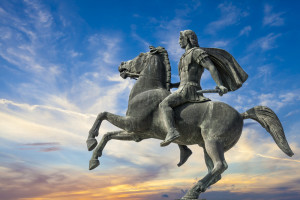 ortheast Africa. By the age of thirty, he had created one of the largest empires of the ancient world – stretching from Greece to northwestern India – and is regarded as one of the most successful military commanders in history. Unfortunately, after his death, his empire crumbled in a few short years. With no succession plan, his generals were quick to carve the vast empire into pieces.

According to the results of the U.S. Trust’s Wealth and Worth Survey, two-thirds of business owners do not have a succession plan (either a sale or transfer of the company). They fail to consider the future of their businesses beyond their own lives. Of the business owners surveyed, 64 percent of the business owners 50 and older had no formal success plan. In addition, only 16 percent planned to pass their company to their family. Every leader desires to build something that lasts. Preserve your hard work by creating a detailed succession plan with individuals who will honor your vision.

In 1962, US spy planes reported the threat of nuclear missiles to the White House. Many of JFK’s close advisors pushed for a full military invasion of Cuba. Taking a step back, JFK made the decision to utilize a naval blockade and pursue negotiations with Soviet leaders. In the midst of this, plans were developed for a possible invasion if those tactics failed. In the end, the blockade worked. JFK’s foresight to remain as flexible as possible in the face of uncertainty avoided nuclear war.

When it comes to running a successful business, it’s important that you never rush into big decisions and immediately make a commitment. Maintaining flexibility is important. Flexibility ensures your business can make necessary internal changes that allow it to respond to developments in its external environment at a low cost. Your business’ strategic flexibility depends on its liquidity (a timely response is determined by your access to funds), its organizational structure, the way its various units work with each other, and the freedom individuals/team have to make decisions. When a concept is not working, you must be prepared to shift your focus. Success depends on your ability to recognize when change is needed, understanding how to bring about that change and the speed in which you can implement it.

Work with a Factoring Company that Leads the Pack

In the words of American five-star general Douglas MacArthur, “A true leader has the confidence to stand alone, the courage to make tough decisions, and the compassion to listen to the needs of others. He does not set out to be a leader, but becomes one by the equality of his actions and the integrity of his intent.”

All in all, this handful of historical leaders offer great examples of how to effectively lead your small business. Strong leadership involves executing lessons learned, and seeing challenges as the opportunities they are. Managing a thriving business requires a leader who is tenacious, makes the right decisions, learns from mistakes and inspires others to success.

If your business follows these leadership examples and wants to push forward in the industry through increased funds, contact us today. We are a factoring company that specializes in purchase order financing that can help you out today.

Strong leadership qualities equip entrepreneurs with the strength they need to build a dedicated team, overcome hardship and create solutions to challenges. Often, the best leadership lessons can be learned from remarkable leaders from history. As you assess your own arsenal of skills, consider the following seven lessons you can learn from great leaders of the past.